Who are you and what do you do?

I am a typeface designer. However, I don’t spend all of my working hours designing type at the moment. Instead, I really wear several hats. Since the end of 2011, and until the end of this year, I’ve been working half-time as a typography research assistant at the Braunschweig University of art. In the other half of my time, I design typefaces, help other type designers and foundries develop fonts, write copy for typefoundry, and occasional articles.

Which story is behind the typeface Malabar, that we use for our festival-webpage?

I designed Malabar in 2007–8 as part of my Master’s degree in typeface design at the University of Reading in England. At the time, I was co-developing a typefaces for the Latin and Devanagari script, and my intended area of usage for the fonts was for Indian newspapers text-setting. Between 2004 and 2011, I worked at Linotype in Bad Homburg. So I released the Latin-script portion of the project through Linotype shortly after my MA course was done, in 2009. I had to place the Devanagari-script portion of the project on the back-burner for a long time, but I expanded that into a family of libre fonts, which I published in 2014 on github.com/typeoff/martel/.

How did you come up with the idea to design the typeface?

Malabar’s letterforms are inspired by the visual language of French Renaissance and Dutch Baroque serif types. Of course, there are also nods to typefaces designed by the great designers who pioneered outline-based digital type design during the early 1980s in there, too. Malabar is a typical graduate student exercise. I published it as-is, based on my work situation at the time. 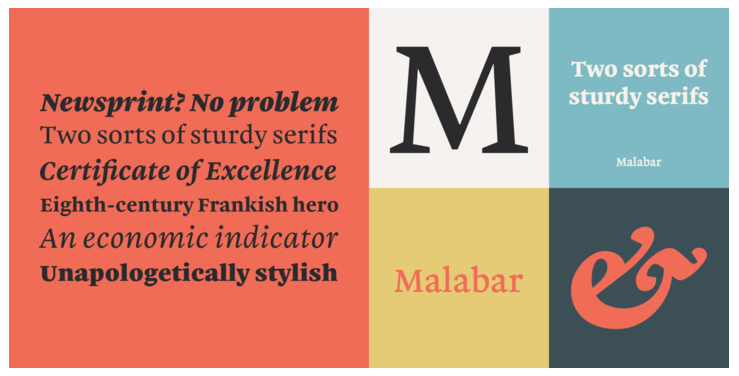 What about the development of the typeface?

After Linotype published the typeface, some members of the sales team at Monotype must have shopped the typeface around to their clients. I was not involved in that at all, but I do remember hearing that there was some interest from eReader manufacturers about the typeface. Potentially, Malabar’s fonts could be licensed by some of these manufacturers for embedding into their devices. In order to make this kind of sale more attractive, Monotype developed the typeface further, for eReader screens. The result was the Malabar eText family. I redrew several of Malabar’s non-alphabetic characters, and also drew Cyrillic extensions for three Malabar font styles. A fourth was drawn by Carl Crossgrove, a Monotype designer. Monotype’s Steve Matteson drew the Greek extensions. The Malabar eText TrueType-format fonts were also were also manually hinted.

What were the main challenges?

All of the changes in Malabar to create the Malabar eText family were to transition the typeface from one that had been originally intended for use in print design to use in screen design. In 2007-8, when I first drew the Malabar letterforms, the revolutionary ability for web fonts to broadly be embedded in websites had not yet hit. Malabar really is a print design typeface. Other changes, like adding Greek and Cyrillic coverage, was a step that made the Malabar eText fonts more marketable for eReading device manufacturers.

Are you happy with the result?

On the one hand, I am proud of the Malabar design. And working with Steve, Carl, and all of the other great Monotype colleagues I had back in 2011 when the Malabar eText project happened was great fun. On the other hand, looking back at Malabar now, I am able to think about its design a little more subjectively. There are a lot of aspects of the design that do not work as well as they could, in my opinion, and their is a naiveness to the typeface. It was, in essence, just a student project.

What kind of trends or changes do you see in the field of type at the moment?

When it comes to type design and type technology, I believe I must cite an answer that Frank Grießhammer recently gave to this question, during an interview with Ilya Rudermann (https://type.today/en/journal/ilya_and_frank): Emoji is the most significant topic of our day. Now, when it comes to the marketing of fonts to customers, there is quite a lot of discussion – on both sides of the equation – about prices. In the last year or so, both Fontstand and Type Network have offered new font licensing models. But there are many other things to think about, such as the right price point for font licensing in subscription models, what effects deep discounts might have on a type designer’s bottom line, and also which role that libre font development and distribution should play.

From your point of view where do the most interesting things concerning typedesign happen at the moment?

Soon more type designers will be designing most of their typefaces for screen use first, and print use second. We are not quite there yet (and I am not sure we should be there yet, either), but that is probably the next interesting place that something will happen in Type Design. Unless you meant a geographic place! I think that Paris is the place where the most interesting type design is happening right now. But the next place? That will probably be in a city in China or India.

Feeling of being able to play a small part in the larger history of type design, typography, and printing. That is really a fascinating tradition, and over the last five and a half centuries, hundreds of thousands – or even millions – of individuals must have been involved in it, one way or another.

Do you read ebooks?

No, not really. I have tried reading on a nook and and iPad before, but never got through a whole novel. I do use some eBook-editions of reference books, like Nikolaus Julius Weichselbaumer’s »Der Typograph Hermann Zapf: Eine Werkbiographie«. But I navigate that on a desktop. I also navigate through a few PDFs the same way, like Hans Reichardt’s 2011 edition of Friedrich Bauer’s 1928 book, »Chronik der Schriftgießereien in Deutschland und den deutsch-sprachigen Nachbarländern«. Almost all of my family members are avid Kindle-users, but I don’t read on that device.

Of course, portability sounds like it is the best argument for eBook readers to me. Obviously, it is easier to carry an one iPad or Kindle in your carry-on luggage than it would be to pack several books, when you go on vacation. As I just mentioned, I like the ability to search in eBooks very much, too. But that also leads to one of the eBook format’s biggest downsides: you cannot really skim an eBook the same way you can with a book that is printed and bound. And flipping back to a specific point is not really all that easy in an eBook, either. However, the biggest problem I see with the eBook medium is the dependancy on specific devices, like a Kindle, which are severely limiting and do not support all of the features that the eBook format itself enables.

Are you available at the E-Book-Festival?

Yes. I will be at the Pecha Kucha night for sure. Perhaps more of the festival, too. We’ll see!

Where do we find you in the www?

The best place to find me is at my own website, http://www.typeoff.de. But I am also a very avid Twitter-user. So anyone may look me up on Twitter under @typeoff.